India ranked sixth in renewable energy (RE) installed capacity in the world in 2017. In FY2017 RE generation accounted for 22% of total energy generation. In addition, India has set an ambitious target of establishing 175 GW of new RE installed capacity by 2022, which would turn India into the world’s largest RE market. Solar and wind are the renewable energy sources (RES) with the highest potential in the country. Solar energy is a priority for the Indian government and enjoys a number of incentives and support schemes. Solar energy has significant untapped potential and can solve the issue of rural electrification in the country. It is projected that solar energy will drive the growth of the RE sector in India in the coming years and beyond.

This report provides a complete and detailed analysis of the renewable energy sector for India. EMIS Insights presents in-depth business intelligence in a standard format across countries and regions, providing a balanced mix between analysis and data.

The report also includes a separate chapter with 5-year forecasts for the main sectoral and macroeconomic indicators, delivered in the form of both time series and analytical commentaries. 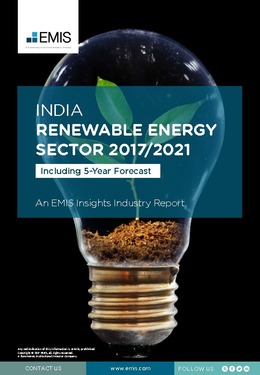