In Q4, M&A returned to their usual peak after experiencing some dips around the middle of the year. The March deal for Fibria Celulose in Brazil (2018’s the largest transaction in the region) was completed in early 2019 and the official price stood at USD 7.5bn, some USD 4bn lower than the initial analyst estimates. Nevertheless, that difference was compensated by Boeing’s December purchase of 80% in Embraer’s commercial aircraft and services operations. Overall for 2018, deals in Latin America and the Caribbean were 1,618 (up 6.2% y/y) for USD 87.5bn (down 5.2% y/y).

Until the very last moment China was ahead of the US as top foreign investor in Latin America. However December’s Boeing-Embraer deal in Brazil for USD 4.2bn tipped the scales back in favour of the US, which took the top spot with 183 transactions for a total of USD 8.4bn. 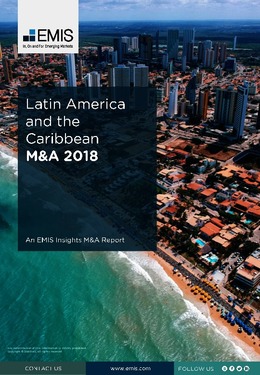